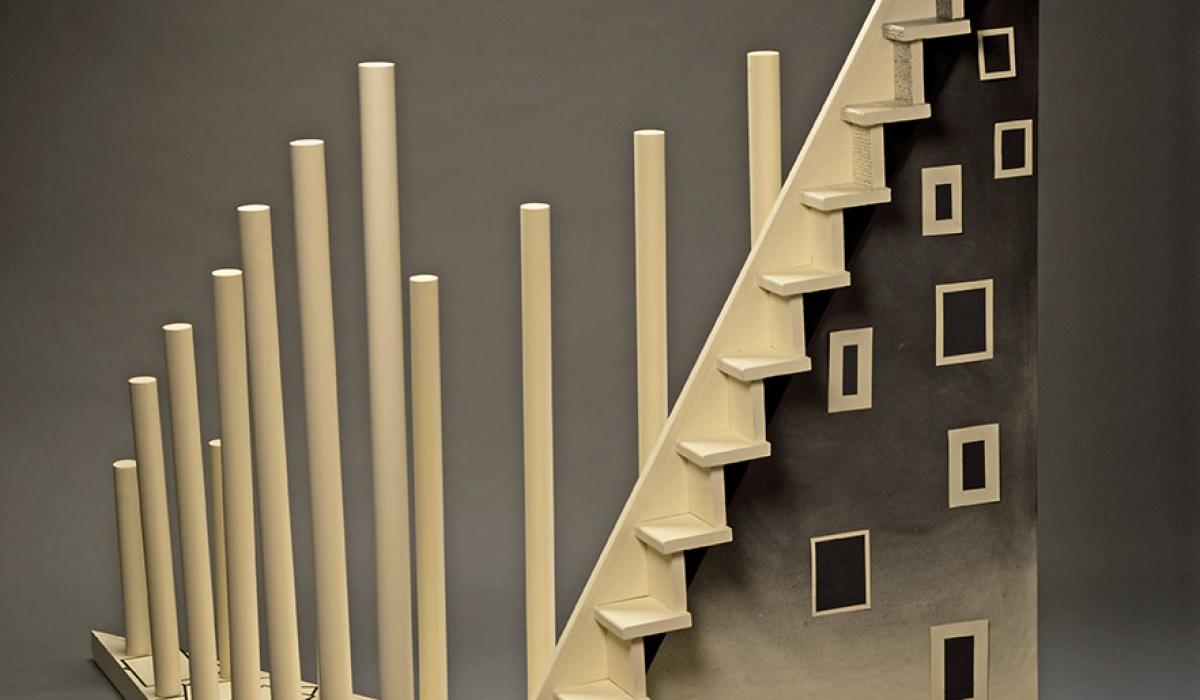 In this issue we have the pleasure to feature the work of Carla Rae Johnson, MFA, a prolific artist, educator and activist, whose media include drawing, sculpture, conceptual, performance, and installation art.
Johnson’s Séance Series expresses heterarchy through poetic and highly elaborated sculptural installations that use visual and verbal metaphorical connections between pairs of notable historical figures who are rarely considered within the same conceptual frame. Wooden sculptures, drawings and writings invite the viewer “to question … language, self-reference, information, and communication” while highlighting social, political, and cultural issues.
Based in Peekskill, New York, Johnson is a New York Foundation for the Arts Fellow in Sculpture and a Pollock-Krasner Foundation Grant recipient. “Her work has been exhibited in solo, invitational, and curated shows in museums and galleries nationally and is included in numerous public and private collections. Since the mid 1980’s, her work has been consistently exhibited in the New York City area. Works by Carla Rae Johnson have been reviewed in The New York Times, The Village Voice, The New Haven Register, The Journal News, and The Times Herald Record. She is represented by Ceres Gallery in Chelsea, and Maxwell Fine Arts in Peekskill, NY”.

Anne Frank Meets Albert Schweitzer
Anne Frank, a Jewish girl from the Netherlands, forced into hiding with her family during World War II to escape the Nazis, died at the age of 15 in 1945 at Bergen- Belsen, but left behind an insightful diary.
Born in 1875 in Alsace- Lorraine, Albert Schweitzer founded a hospital in what was then known as French Equatorial Africa and received recognition and a Nobel Peace Prize for his efforts. Today, our view of Schweitzer’s statements tainted by colonialism, paternalism, and racism, overshadow his work.
In the sculpture, Anne Frank and Albert Schweitzer play hide and seek, but it is Anne who seeks and Albert who hides. At the pinnacle of the piece, Anne’s tiny window looks out onto the world. Ironically, Albert Schweitzer’s work is essentially hidden from her vantage point.

Georgia O’Keeffe and Galileo Galilei
The fifth portion of the Séance Series brings together Georgia O’Keeffe and Galileo Galilei. They search the heavens and the earth in a game of I Spy.
Georgia O’Keeffe (1887-1986) has long been revered by feminist artists as a forerunner, a matriarch, and a role-model for women artists. This, not only because of her serene and powerful paintings, but also because she lived her life creatively and logistically on her own terms. The stark beauty of the New Mexico desert drew her there. I feel Georgia’s vision was one that required a supreme focus, and careful attention to her surroundings, the landscape, and natural forms. In this sculptural tableau, if you look from a particular angle through a hole in the bovine pelvis, you will observe the solid blue of the sky seen in one of her iconic paintings. Her focus, her attention is on the material presence, the beauty and drama of natural forms here on earth. Her choice to live and work in isolation must not have been an easy one, hence the uncomfortable quality of her three-legged stool, which also might evoke the reported prickliness of her personality!
Galileo Galilei, (1564-1642) represents the paragon of all observers. As the founder of modern science, Galileo committed his life to empirical knowledge. Something must be observed and verified to be considered “truth.” Galileo believed and asserted this in an age when the church was the sole arbiter of what was considered true. Here, Galileo’s telescope, symbolic of his commitment to observation, is pointed towards the heavens. Galileo sits upon his own understanding of the truth, experiencing the discomfort of his then heretical ideas about our universe.

Emily Dickinson Meets Marcel Duchamp
My fantasy, realized in this work, has been to bring these two originals together: a meeting of the minds, a conversation between equals, a challenge to their spirits. Thus, this first portion of The Séance Series features a sculptural tableau referencing an imagined meeting between Emily and Marcel. A good part of the challenge and mischief of such a project lay in the astonishing dissimilarities of these individuals. Two more different personalities and creative styles could not, I think, be envisioned. This sculpture depicts an encounter of two who never met. (Emily Dickinson died in 1886, and Marcel Duchamp was born in 1887.) Because chess became a serious obsession with Duchamp until eventually it seemed to eclipse his making of art, Emily and Marcel sit down to play a game of chess. The only piece is Emily’s loaded gun.

Audre Lorde Meets Abraham Lincoln
Audre Lorde was a self-proclaimed black, lesbian, feminist, socialist, mother, and warrior poet. A charismatic speaker, Lorde valued honest, self-awareness and speaking truth to power. She questioned the racism, sexism, homophobia, and classism of the social structure, her peers, the black community, the white power structure, and feminist sisters. Lincoln sat in the seat of power. His mythic rise from poverty to presidency was premised upon his position of privilege: white, male, North American, tall, thin, heterosexual privilege. His greatest accomplishment: freeing the slaves, was not a priority. Only when it became part of an overall tactic for success in the preservation of the Union did Lincoln enact the Emancipation Proclamation to free the slaves. In this sculptural tableau, Lorde and Lincoln play “bridge.” This is not a card game, but a physical, symbolic span across an obstacle. A bridge needs to be built between privilege, power, influence, and economic security, on the one side, and those denied the same advantages on the other. It is Lincoln who must build the bridge. It is not a straightforward crossing, but a difficult, jagged one; composed of huge steps up, twists, inclines, and internal tensions. At the top of the center of the crossing is a spirit-level, symbolic of the quest to equalize and create a more level ground. Beneath the bridge sits the master’s house. Symbolic of the existing social structure, it is this structure that must be bridged with understanding and common ground, level ground, so that together Lorde and Lincoln (you and I) can dismantle its walls and work toward a just future.

Hildegard of Bingen Meets Herman Melville
As I contemplated the encounter of Hildegard and Herman I became aware of some deeply significant unifying qualities they shared. Hildegard and Herman each tap into the spiritual reservoir of a collective unconscious to realize profoundly transpersonal revelations. Thus, their work is of deep psychic significance to all humans. They both balance conscious intellect with visionary insights. Their visions emphasize the interrelatedness of all things, above and below and the union of opposites: as in the complex relationships of beauty and terror, good and evil, and light and darkness. Their respective works reveal an unequivocal respect for nature, the creatures of the natural world, and the essential relationship of water to life. Finally, they each identified art as the missing link between science and spirit. The sculpture, Hildegard of Bingen Meets Herman Melville depicts the skeletal form of a small boat in which Hildegard and Herman play two separate word games (game boards are positioned on each side of a medieval lectern). They ride on a wave of lettertiles from which they form words consistent with their individual visions. Symbolic of the infinite creative possibilities realized by both Hildegard and Herman, the sea of letters also suggest the sense of immensity and cosmic wholeness we find so compelling in their works.

Bessie Smith Meets Beethoven
This portion of the Séance Series brings together the immortal Bessie Smith with the beloved Beethoven. Blues singer, intrepid entertainer, wild-party-giver, powerful, original, and deeply moving performer; Bessie Smith still maintains a hold over our souls and psyches: through her voice and her lyrics, she still has the power to incite laughter and tears from listeners far removed from the post-civil war, Jim Crow, blues world of the black performers of the 1920’s and 30’s. I wanted to pair her with the premier icon of classical music; the epitome of Euro-centric, high-brow, creative genius: Ludwig Van Beethoven. They convene to play a piano which transmits only silence.

https://carlaraejohnson.org/
Back to Issue:
Heterarchy, Language, and Educational Technology: A Cybernetic Exploration